So, stupidly, I resumed smoking in my 39th year, having cut it back to very little in my mid 30s. I dunno why, and frankly, this is no time for recriminations. So back off! I gotta focus here.

Maybe it was because of my deep certainty that there'd be no such behaviour after 40. I think I cleverly reverse wedged myself into going overboard on the toxins in the lead up.

Yessir, I can barely string a coherent thought together. Good thing I finished that article on Saturday, before my brain broke. Mind you, doing those footnotes on Monday was painfully slow - like trying to thread a needle drunk, wearing vaseline-smeared goggles, and those crazy anti-masturbation gloves favoured by 19th century nuthouses.

Oh yeah, and %$& you, Walter Raleigh. See that Man-o-War closing in off the starboard side?

So, last night I watched Killing of a Chinese Bookie, which was a terrific film noir-style effort, while it all hung together. Which was approximately 60 mins, in my view.

Everyone raves about this flic, but am I the only ill-informed film-waller in the room who found it had some major continuity issues? A wee problemo or two, with the olde edit suite?

Mind you: Ben Gazzara rules as Cosmo Vitelli. And its kinda bugging me too. The film, that is. I'm certainly not forgetting it in a hurry. Maybe that's what Cassavetes wants. A piece of my mind.

Frankly, I think I'm getting paranoid watching these Cassavetes films. Still, in the name of science....
Posted by Lefty E at 23:36 No comments: 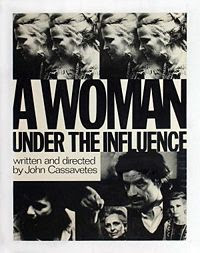 Blimey. This was a discovery. I'm not really one of yer film buffs who nods sagely when Directors' names are dropped. More a film bluff.
But I just watched A Woman under the Influence, and John Cassavetes is the first director I would unreservedly declare a genius. Peter Falk and Gena Rowlands - the latter especially- give performances that are nothing short of harrowing in this psycho-drama. Soo-weeee. I had to watch it two sittings.
Apparently it wasn't going to be distributed until Scorcese threatened to pull his own film from a festival - unless this one got the nod. Which just goes to show Scorcese knows a thing or two about film. Unlike me. But I'd wager Mike Leigh is a big Cassavetes fan, wouldn't you say, erm....Margaret?
Five and a half lattes.
Posted by Lefty E at 23:44 12 comments:

You know, the median age is more or less exactly 37 these days, here in the western Antipodes - so I slipped over to the old half some time back.

That said, there's no avoiding the significance of one's upcoming fortieth birthday - or is there? Just a couple of weeks of the 30s left now. It's been grand, I must say. At the start of this decade, I was an itinerant musician and part-time mental health worker, avoiding my PhD like the plague.

Now look at me. An academic at one of Victoria's premier lesser universities and part-time fort enthusiast, avoiding my overdue article like the plague.

I'm feeling rather sanguine, truth be told - though a few months back I think I started to go a bit wobbly about around the edges, and acting rather strangely. (For example, I went right off Portuguese forts in Asia for a good couple of weeks).

But now... meh. I'm just looking forward to the party. Otherwise feeling rather insouciant about it all.

So, what should I be thinking about at such a time? Health? Insurance? Comfortable footwear?Wills and probate?!!

Any wise thoughts and reflections from my elders welcome.
Posted by Lefty E at 20:10 6 comments:

This is gold, so I cite it in full; regarding Downer's negotiating tactics with the East Timorese government over the Timor gap oil revenues.

Peter Galbraith, the former US diplomat and author of books on foreign policy issues, was attached to the UN office advising the negotiations. He recalls going to Adelaide in 2000 to notify Downer that the East Timorese wanted to renegotiate the "Timor Gap" treaty agreed by the Indonesians in 1989."Somehow he considered this deeply offensive that we were doing it, that I was doing it," Galbraith said. "At the meeting he sort of kept making the point that he'd been more successful than his famous father and perhaps that I'd been less than mine. There was a real psycho-drama there that really had nothing to do with the issue." (Galbraith is the son of the celebrated economist and author J.K. Galbraith. Downer's father, Sir Alexander, was immigration minister in the Menzies government.)

"The thing about the oil negotiations," Galbraith adds, "is that Downer adopted both a condescending and bullying approach both towards the East Timorese and the United Nations that ended up making him one of the most unpopular people in East Timor. "It did considerable damage to Australia's reputation, and ended up for a worse bargain for Australia than a more diplomatic approach would have produced. The matter would have wrapped up sooner and Australia could have had a larger share of the oil."

Galbraith, who is a senior adviser in the presidential campaign of US Democrat candidate Barack Obama, said: "Being Australia's longest-serving foreign minister may not necessarily equal being its best."He won't do any damage in his job as the Cyprus negotiator," Galbraith added, referring to Downer's new job as a UN special envoy. "Because one thing's for sure: if there were any serious chance of making progress between the Greeks and Turks on Cyprus, the UN would not have appointed Downer."

A bit of woo

You know, like a lot of latte-swilling inner city leftoids, the overt trappings of nationalism are not really my bag. Not my thing. (Get a new flag and we'll talk though.)

But that doesn't mean I don't have a sense of place. And frankly, I really love a lot of Australian expressions. Especially old school ones that I heard when I was in primary school in the 70s; usually from then 50-60 year olds. You know the sort: blokes called Len, with a sybillant whistle, a 40s hat and form guide under the arm. Old sheilas called Beryl or Esme with a fascinator, and the air of having hatboxes secreted in top cupboards at home.

Another was the favoured declamation of my own grandmother: "my hat!"

Or referring to teenagers as "young blades". Or "tiger". Steady on there, tiger.

Most of these I haven't heard in ages. So, in the spirit of cultural heritage preservation, feel free to like, document any like, disappearing personal faves. Dude.
Posted by Lefty E at 01:01 2 comments: 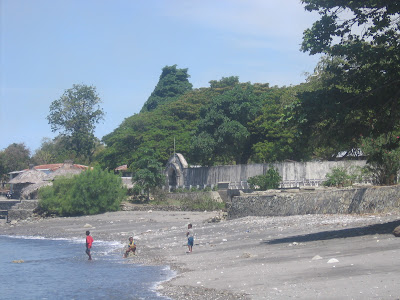 More forts which are Portuguese and are also in Asia!

Ah, but is it??? Portuguese, I mean. Obviously it's in Asia.
Ah, but is it in Asia? Oh puhleeease, let's not get into the Wallace line debate. Isn't that about fauna anyway?

Well, while those two sort that out, allow me bid you bemvindo to mysterious Maubara. What a cracking little fort it is too. Simple, square design. Looks to me like it was designed primarily for booty storage rather than defence. Imagine the sandalwood piled up in there circa 1680. Woo baby!

Incidentally, its a great little beach too. By chance, I met Kirsty Sword Gusmao there in 2005, when she was swimming there with her three lovely little kids (and a bodyguard or two). Turned out she knew my Timorese pal Alex from the resistance days, so we all had a chat.

Anyway: the mystery. What you need to know is that Maubara is west of Liquica - and that gets us into the ill-defined regions which were contested between the Dutch and Portuguese for some centuries. Therefore the crucial question is: is it of Portuguese, or Dutch provenance? 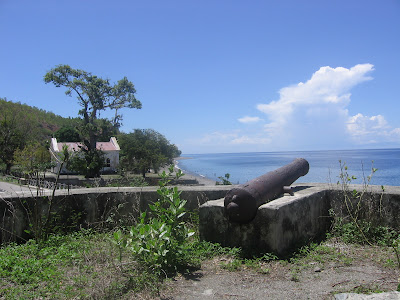 The enclave of Maubara was certainly among those handed over to the Portuguese in an ill-advised trade, in which the Dutch got the entire islands of Flores and Solor. What a rip-off! That was Governor Lopes da Lima, who lives in infamy for his poor negotiating skills. That was in the 1850s, so one would presume this is originally Dutch. Also its rather regular looking, and frankly, the Portuguese were generally a bit more interesting in the main - although there's also the Batugade fort; which is not entirely dissimilar.

Anyhoo - fact is, no one can be precisely sure, since these sandalwood bearing enclaves passed between the two powers with great regularity in the 1600s. Bottom line is, its a nice little fort, with a full sea wall, which you can visit, and some more than satisfactory cannon stockades and old guns. So where the bloody hell are ya?! etc.
Posted by Lefty E at 22:46 2 comments: