International Carbon Tax - Talk me out of this manifesto!

Ok, unless someone tells me why this is insane and can't possibly work, I'm going to start an anti-global warming campaign based on the following principles:

Unlike the staff here at BmL -who possibly comprise the entire membership of the France Gall Appreciation Society (Bureau d'Australie) - you may not be aware that the wonderful France was also big in Germany. She had quite a few German language records, and a decent career east of the Maginot line.

Frankly, all the German period songs are crap - except this one. I quite like Computer Nummer Drei (1968), despite its naff premise of a computer dating future (pfft ... as if!).

But that's not why I'm showing it here. Frankly, this clip ist der Uber-LULZ!!1! (as they say on the German internets). Viz, check the audience going off at 0.45 and 2.05. Woooohah! 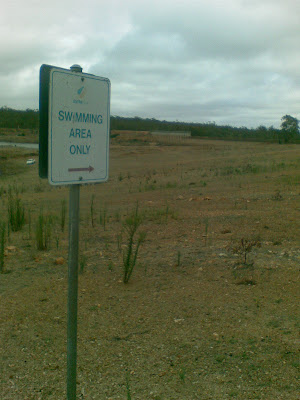 I'm just returned from a 40th birthday up in the Grampians. Check out today's surf at the Rocklands Reservoir, which supplies Horsham in north-west Victoria.

Locals say it was full 10 years ago.

You know, whatever happens with global warming, I have a feeling northern Victoria ain't going to make it. Even in the seven years I've lived in Victoria the regional lakes have basically all dried up.

The Castle's "we're going to Bonnydoon" song (1997) may yet prove something of a cultural requiem for lost water recreation zones of southern Australia.
Posted by Lefty E at 22:40 8 comments:

Brisbane: Before the Saints & Go-Betweens

Growing up in Brisbane didn't always seem so great at the time. The big bands didn't drop through, pot was not only illegal but seriously draconian penalties attached, and demonstrations were essentially banned. I remember going with Mum to bail my old man in 1978 after after one of the endless - and illegal- civil liberties marches. Queensland, police state, demand the right to demonstrate. That's etched in my mind. Ten years later it was me at the demos, and everything was still the same. On the street and the state is not neutral. Chanting the same as my Dad had. Intoxicating... frightening. Then the inevitable blue shoulder charge, and we're running down the slope through Albert Park, someone's screaming. Its scarcely credible in retrospect.

What a hick town.

I'm so glad I was there.

The first gig I went to as an adult was at the Roxy (now the Arena) in early 1986 - I think it was the Huxton Creepers. I was 17 and the Valley by night was intoxicating. Its still had a serious air of danger then - and halfway through the gig I witnessed a classic pre-Fitzgerald Quinceland scene. To my left one of the walls in the Roxy literally opened up, and out strode Gerry Bellino, puffing on a fag. Behind him I could see an illegal casino, hidden in the walls. He didn't care, he spoke to some staff and casually sauntered back in. The door closed and the Creepers played on. Business as usual.

Anyway, among my Dad's records which were otherwise exclusively 50s jazz was a Brisbane band. Who knows upon which of the 1000 balmy, narcoleptic nights of adolescence in '80s Brisbane I first played it - but this magnificent track has always stuck in my mind. Before the Saints, and the Go-Betweens there was Carol Lloyd and Railroad Gin. Dad must have seen them live circa '75 and I suspect, been as blown away by this track as I was: Matter of Time.

No? Well check out the Worldometer anyway. And watch it all click over, before your very eyes.
Posted by Lefty E at 20:45 2 comments:

Now, I'm not in the business of tarring entire nations here at BmL, but think its fair to say that Austria has enjoyed more than its fair share of sociopaths, high-profile xenophobes and general weirdos. To the casual observer, there might seem to be a disproportionate number of persons imprisoned in cellars for decades; an eerie succession of extreme Right leaders (who, it turns out, are secretly gay and having it off with each other); and perhaps a revisionist 'well it wasn't us' attitude which permits parties that would be considered extremist in Germany to be defined as 'centre-right' affairs.

So, what's going on in Mitte-Europa? One of my favourite directors, Michael Haneke, an Austrian himself (though born in Munich) clearly wants us to know just how weird shit can get when you're landlocked between Germans, Swiss, Italians, Magyars, Slovenes and Czechs. Oh, and Liechtensteinians.

I really liked Hidden (2005) so I started checking out his back catalogue. Aside from the well-known The Pianist (2002), there's some really intense and disturbing psycho-dramas such as the gripping Funny Games (Austrian version 1997, remade by Hollywood in 2008 - see the original is my call) , and the seriously screwed-up (and true) story of an Austrian middle class family's inexplicable group suicide: The Seventh Continent (1989). More cheery fare is offered in his examination of a mass killing at an Austrian bank 71 Fragments of a Chronology of Chance (1994) - the third movie in his self-titled "glaciation trilogy".

I guess it doesn't sound all that appealing now, now that read over the themes! But I must say I'm rarely so mesmerised by the small screen than when Haneke directs. Can't wait to see what he's up to next.
Posted by Lefty E at 16:35 2 comments:

Is as an tAstráil mé

That's, "I am from Australia", in Irish. Pronounced more or less like this: iss ass on tass-troyl meh.

Personally, I like the Irish word for England: Sasana. You can practically hear it being spat from the lips, any time between 1169 and 1922.

If you liked that, why not go hardcore, and listen to the above in all three major dialects of Irish Gaelic? I know I did!

So, I fairly chewed through Christos Tsiolkas' The Slap - which in itself is a good sign. I don't know about you, but I tend to .... dawdle ... when I'm not enjoying a book.

Tsiolkas writes about modern Australia, kids, parenting, intern-generational misunderstandings, culture shifts, especially in migrant communities. Wow, that's like, relevant n' shit to my life, and I could relate. Its not rocket science really is it? I don't mean to belittle his achievements by saying that - but it has to be said that not every modern Australian author gets this wee marketing trick. Importantly, I feel, he doesn't take the the modern obsessions with work and parenting as some sort of given, but as a culture to be written about.

Plus, as its happens, I live in the suburb in which it is primarily set.

Anyway, I liked it. That said, I do believe the chapters are of varying quality, depending on how far the author is from the characters themselves. In my humble and ill-informed opinion, the three chapters on the Greek-Australian male characters are absolute masterpieces of contemporary Australian writing.

The chapter on the older character Manoli I found especially moving. Growing up as a lad in West End, Brisbane, my best friends were Greek-Aussie kids. I always found their parents utterly mystifying, actually. I could never get a slightest bead on where they were coming from, with anything really. Nor did I understand the deep political splits within Greek Australia either, until I was older, and worked out that the first-generation socialists and royalists truly hated each others guts - and that was why there were three Greek clubs in West End (one for each faction, and then the "Greek club" - where the rule was you couldn't talk politics). The Manoli chapter had me right back in the Kokoris household - with an inkling of what my friends' parents must have been thinking the whole time. Thanks for that, Christos T - it actually meant a lot to this Skip to revisit all that through your eyes.

That said, I have some minor quibbles. To be honest, I'm not sure the female character chapters work as well - and maybe that's about the author's distance from those characters. Secondly, I found the Hugo character a bit exaggerated. He's like the worst 10 behaviours you've ever seen from any 4 year old rolled into one 'strawboy' character. This has the unfortunate side-effect of prompting something of a "moral panic" style inquisition of modern parenting which is - frankly - hyperbolic. I might move in certain circles, etc, but I find modern parents far more reflexive, ironic, and plain disciplinarian than Tsiolkas allows for the purposes of this book. But what the hay - inflating the issue allows him to investigate a theme that is without doubt interesting and engaging. Good writers should be agents provocateurs, no?
Posted by Lefty E at 13:27 5 comments: