Here's a few pics of signs and ads in the national language of Solomon Islands Pijin. I must confess I didn't pick up very much after one week in Honiara - only Lukim yu (see you later) and Tanggio tumas (thanks very much). Oh, and Solomon Islanders say "set" a lot - to indicate that everything is good or fine. 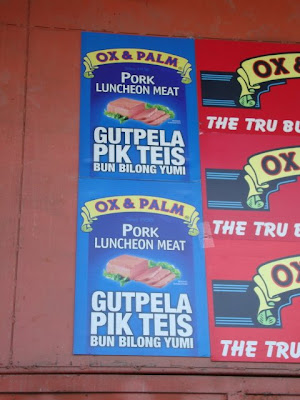 I'm told that Solomons Pijin, Tok Pisin of PNG and Bislama of Vanuatu are all mutually intelligible - effectively creating a pan-Melanesian lingua franca. 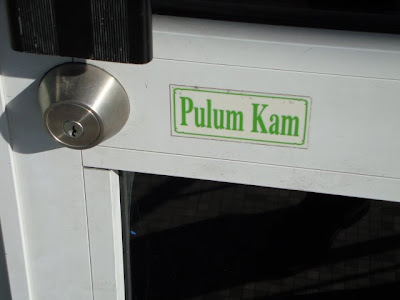 Oh, and mind where you chew your betelnut, tanggio tumas. 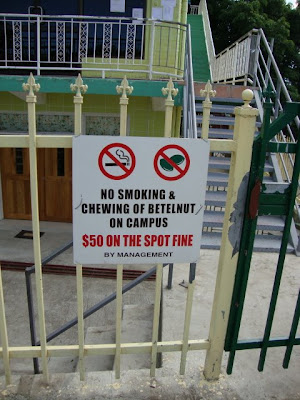 And can't be arsed!

I've had a great couple of weeks in the Asia-Pacific region on various work missions, followed by a short holiday in Rio de Brisbaneiro - which was just long enough to get the flu, basically.
Back at work now, and not doing a very good job of impersonating someone who cares about semester two, and its looming deadlines. Sniffle. Groan.
I guess I'll sleep my way out of this slump over the coming days. Any tips on how to appear engaged? 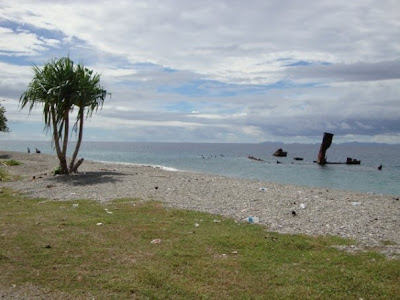 Anyway - check it out! On my spare day, I snorkeled on this wrecked WW2 Japanese landing craft at Ironbottom Sound near Honiara, Guadalcanal, in the Solomon Islands. Full of coral, rainbow fish, and the rusting detritus of Imperial visions.
Ironbottom Sound, as you may know, is so named after the sheer number of US, Japanese (and one Australian) vessels sunk there in the Battle of Guadalcanal in 1942 - widely regarded a major turning point in the Pacific War, and the first major allied victory over the Japanese. There's an impressive US memorial on the hill above Honiara, which commemorates the major sea and land battle to capture Henderson airport and other Japanese-held areas of Guadalcanal.
Posted by Lefty E at 15:15 2 comments:

Auto-reply: Out of Office

BmL is currently out of the office, and at large in the region. Any urgent matters can be raised via the fort-gate comments & suggestions box, below, and will be attended to by a special intergovernmental taskforce, in due season.
Posted by Lefty E at 08:07 2 comments: