You know, with Eurovision, I tend to skim or avoid the songs, and turn up avec popcorn for the regional bloc voting. Then try to annoy Ms LE by guessing as many douze points as possible. I got about two-thirds right tonight - not that its especially difficult.

Briefly, since I've got the flu and must retire, here's my take on a few evident trends:

Sometimes I'll watch a film just because it was made in that year. Whitlam, Watergate, Fischer v Spassky - it was all happening.

Some great films too: The Godfather, Solaris, Fritz the Cat. But I come to speak of a discrete genre of film, the white male war anxiety flic.

Perhaps we have Australian species of anxiety cinema in Walkabout (1971) starring a young Jenny Agutter (yowza!), The Chant of Jimmy Blacksmith (1978), and maybe the Cars that ate Paris (1974).

I guess you don't need an SBS film reviewer on staff to work out these are male anxiety psychodramas about Vietnam, with probably also a touch of blowback from the rise of feminism, and the civil rights movements as well.

What do these great films boil down to? This: we're acting tough, but don't know we're the hell we are, or what we're doing. And the local folks we're really pissing off (Hillbillies, Cajuns) really do. They're out there. In here, in the US swamps and hills. Shadows on our peripheral vision.

The protaganists are plainly unequal to the task. They are either civilians with warrior fantasies, like crazy Burt and his bow, or just plain scared (read conscripts). Or literally firing blanks, like the Louisiana National Guard.

The (erm...) climax, of course, is the complete demolition of the fragile masculine psyche on parade. "Can you squeal like a pig, boy?". Apparently that was ad-libbed. Boy, that bit part actor got it. But no less, the mental breakdown of Cpl Bowden, whose insane destruction wrought on civilians to compensate for earlier cowardice seals the fate of all.

Only two will make it: not the showy Rambo. He's toast. Not the scared guy who believed Rambo would protect them either. He dies horribly. The survivor is the quiet American. The one whose reluctant bravery is directed solely at getting out of this insanity, and respected the locals more from the get go. And the other scared guy, who follows him instead. He's got a chance. In Deliverance at least, he's even more interesting: a Phoenix, arising from the ashes of the obliterated faux-macho self.

Oh, and Hoyt Pollard played the banjo.
Posted by Lefty E at 21:43 4 comments: 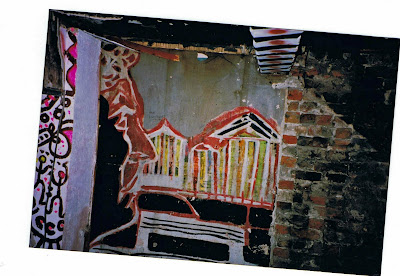 Well, if that post title doesn't generate some google hits, nothing will. But hey, I've got a minor Beatles tale, a blog, and a shameless, self-promotional bent, so... you do the sums.

Back in November 1994, I louched up to Liverpool from my job in London (teaching politics at the lowest possible rung of tertiary institutions in the UK; South Thames College, Tooting. No doubt you've heard of it, while quaffing oysters with some ra-ra Oxbridge types).

Anyway, I was just hanging around pointlessly outside the abandoned Jacaranda Club, where Os Beatles - as they are known in Portugal - use to play before they landed the more famous Cavern gig.

Bing! Up comes Alan Williams, the Beatles first manager.
I said "hey, you're Alan Williams".
"yes, hello there ... have you read my book?"
"er, no, sorry. I saw your picture in Peter Brown's one".

Despite this, he invited me down into the low-ceilinged club, abandoned for 10 years at that time. Which was really nice of him - he's a very friendly chap. Thanks Alan! With him was the new prospective owner of the club, having an inspection.

According to your man Williams, the wall art you can see was painted by none other than Stuart Sutcliffe and John Lennon, back in 1960. Have a squiz. Below is a pic I snapped of Alan, with a Sutcliffe original behind him, and above some pre-renovation Sutcliffe and/or Lennon wall art. 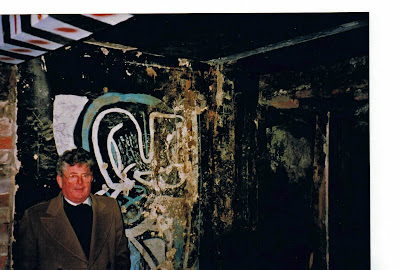 I gather you can now go to the refurbished club, and see it yourself, if you're up Liverpool way.

PS if you want to see the restored version of the Stuart Sutcliffe painting behind Alan Williams, there's a picture of it here, half way down the page.
Posted by Lefty E at 23:11 2 comments: 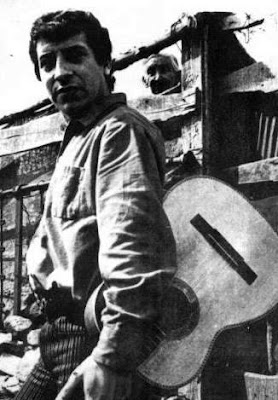 Here's a news item from a Latin American news list I'm on. The upshot is that the investigation into the death of Chilean singer Victor Jara, killed by Pinochet's forces in 1973, has been closed without a finding; raising the prospect of many other investigations into disappearances under the Pinochet regime being dropped.
I needn't translate the demand: NO A LA IMPUNIDAD.
Lot of it going around.
The Victor Jara Foundation webpage is here
ACCION CULTURAL POR LA JUSTICIANO A LA IMPUNIDAD EN LA INVESTIGACION DEL ASESINATO DE VICTOR JARA 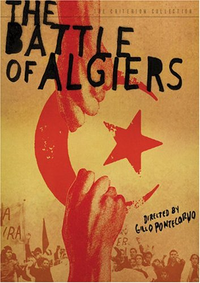 Woo baby! What a stonking film this is. An Italian production made in 1966, dramatising the Algerian war of independence and French counter-insurgency tactics in the mid to late 1950s.
But really, as interesting as all that is, its the performances. The French commander is so compelling yet understated in his role, I actually started to wonder if that section was documentary footage. It's gripping cinema.
According to sources, the key filmic influences were "Italian neo-realism, French cinema verite and Soviet socialist realism". I have no idea what neo-realism is, frankly, but the rest of that sounds about right I suppose. Whatevs. I hasten to add, there's none of tiresome worthiness and longwinded "mass as actor" shots of lowgrade Soviet agitprop.
More interestingly, this: The Pentagon screened it in 2003 to get their Intel guys thinking about the emerging challenge of the Iraqi insurgency. According to Wiki, the flyer for the Pentagon screening read:
How to win a battle against terrorism and lose the war of ideas. Children shoot soldiers at point-blank range. Women plant bombs in cafes. Soon the entire Arab population builds to a mad fervor. Sound familiar? The French have a plan. It succeeds tactically, but fails strategically. To understand why, come to a rare showing of this film.
Which gave me pause to think - once again, we find the US following the French around, falling in the same traps without really looking at the French experience, and making the same mistakes - the other prime example, of course, being Vietnam.
Anyways - if this film doesn't boot your arse into next Tuesday then .... I guess you're just, erm.... interested in other things.
Oh yes, and props to Fyodor who wins the Lucky d'Or prize for predicting the subject of this post on the basis of some scant clues on the Truffaut thread.
Posted by Lefty E at 17:30 7 comments:

Huge news - the Rudd Government is said to be abolishing TPVs altogether.

This news will reverberate around the world - as the Australian TPV was the inspiration for many regressive changes in the EU, especially places like Denmark and Germany. It caused untold suffering and harm - and no doubt contributed strongly to the number of deaths of women and children the SIEV X, as it refused TPV holders already resident in Australia rights to family reunion.

Anyone who still claims that Rudd can be dismissed as some sort of 'Howard-lite' character (you know the shtick: maintaining the fiction of some enduring ideological victory, to ease the pain of electoral loss) will now have to reconsider. This is a major departure from the Howard era.

Ruddock in particular will be taking it hard - he really did see this as his international contribution to revising the scope and mode of protection under the 1951 Convention.

Truffaut, or not Truffaut?

You know, I don't mind saying, I'm broadly ignorant of film history. So I've been trying to school up at my local vid store, which is rather good, and has things organised under Directors and what have you.

Anyways, I dipped my toes in French New Wave, and I must say, I'm unimpressed. I say a breathless Non! to Godard. The exception is Truffaut. I think Jules et Jim is a classic - pacy, amusing and fun. Fahrenheit 451 as well. How cool is Oskar Werner?

Buñuel is another exception - and probably because he's not French. Maybe not New Wave either - what would I know? Just what I like, and I can recommend practically any film from his French exile period. Particularly Belle de Jour - sporting a young Catherine Denueve and the aging master Fernando Rey - along with the hilarious The Discreet Charm of the Bourgeoisie.

If that fare's a bit too light for your tastes, get Viridiana. His classic subversive satire on Francoist Spain.
Posted by Lefty E at 17:26 17 comments:

I just spent the weekend up in Brisbane, and you know, my original hometown is a beautiful place. You do forget how tropical and verdant it is when you live elsewhere. Not to mention the wonderful riverine suburbs, and the unparalleled views of the CBD.

But I have a complaint. A major complaint, actually. Now, dont get me wrong, I support high density in the inner city, for sustainability reasons. But why, o why is EVERY NEW UNIT COMPLEX IN QLD AS UGLY AS SIN?

Here's my theory on what happened.

In 1982 some 4th year Architecture student at the Gold Coast half-completed the most pedestrian, shitty beige/ off cream box drawings, for an satirical honours project entitled "Yuppie suicide watch house", then lapsed into a coma shortly before submission.

Enter some hideous white shoe fossils of the Surfers era. Taking the unfinished drawings of our averagely talented and now comatose satirical hack, the entire developer class of the QLD chipped in $48 and patented the satirical box plans as 'Quinceland standard issue yuppie slum dwelling', aka the 'Smart state people's unit' , and then proceeded to repeat the one housing design ad nauseum, Poland under Soviet jackboot style.

Sadly, there's no money for improvements on these - the worst designed units in all Christendom - because any extra funds must of course go to the Council in bribes. There's simply no other possible explanation as to how these to egregious assaults against taste keep springing up with council approval.

And here's the final condemnation on you, QLD developer, and alleged QLD 'architect' (and I use the term ironically). The only decent modern architecture in the whole freakin state is Housing Commission. Wow, they even have a few simple nods to the vernacular QLDer style. How hard was that?

Brisbane is a beautiful place. Please stop screwing it up.
Posted by Lefty E at 23:14 No comments: