Yes, from the team (David Williamson scriptwriter, Tim Burstall Director) that brought you the more renowned Alvin Purple, Petersen (1974) starring Jack Thompson in his first lead role is a classic.

Basically, Thompson is an ex-AFL star and electrician who saves up his dough to go to Uni in the pre-Whitlam era. Great scenes from University of Melbourne in the early 1970s. Thompson has an affair with his English lecturer (Wendy Hughes), fails the course when her Professor husband becomes jealous, becomes frustrated with his own wife (Jacki Weaver), and eventually gets beaten up by the cops while mouthy and drunk, sealing the conflict of class cultures theme with a nice little Queensland-style 'police interview'. Bud Tingwell appears briefly - and quite hilariously- as Thompson's agnostic Reverend father. All very raunchy in that frappez le bourgeoisie early 70s mode.

I also saw Stork recently - an earlier incarnation of the same team's work - which is rougher, and doesn't flow nearly as well as Petersen. Mind you, you get to see Monash Uni in that one, so they're both interesting pieces of social history.
Posted by Lefty E at 23:41 No comments:

Strange times at the Yasukuni Shrine

So, if you had this idea that the Yasukuni Shrine (and associated Museum) in Tokyo was probably a grand exercise in historical revisionism, well - you'd be pretty much right.

Naturally, I had a poke around while I was in Tokyo. Actually, the kids (our one, and two of a friend) loved it, lots of Zeros, tanks, even a piloted Kamikaze torpedo to look at. But I will outline the revisionist high (low) points for you.

But firstly, some possible misconceptions: 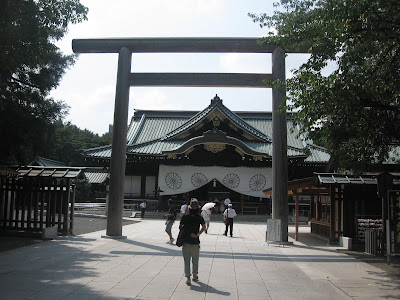 The Yasukuni Shrine is not a monument to WW2 (known as the East Asian war in Japan). It's a Shinto Shrine, originally built in the late 1860s to commemorate the Imperial Army which ended the 600-year rule of the Shogun warlords, who kept the Emperor around as a quaint figurehead. This was the birth of the modernising Meiji imperial regime which took Japan out of a era of near-complete isolationism, and general Koto-plucking feudal backwardness under the Shogunate. In that sense, the Shrine itself is originally a monument to a wholly unobjectionable -indeed rather positive - development in Japanese history.

Second, well, no one really has a problem with a memorial to the ordinary war dead, do we? The poor schmos in the lower ranks etc. Pretty much no one in the region objects to that, as I understand it.

Nope: its the interment of 1000+ documented war criminals - including several very high profile ones - that really pisses off Japan's Asian neighbours, and a whole lot of other nations for that matter. This is where the Japanese Government goes off the rails at Yasukuni.

And then the revisionism: so, apparently there were loads of "Chinese soldiers in civilian uniform" at Nanking. Oh really? I guess that would explain the indiscriminate massacre of people looking like civilians. I mean.... seriously. Do the kids get taught this? This section of the Museum is a card-carrying outrage in progress.

And oh yeah, Pearl Harbor happened because the US was deliberately denying resource-poor Japan access to steel, energy etc. Actually, that's pretty much true: but what it fails to mention is that by that point the Japanese army had not only been committing major atrocities in China for several years, but had just recently invaded French Indochina.

And can you believe it? Then the Yanks blockaded us! Yeah, what a head-scratcher. Hard to fathom, right?

Moving along, the really notable feature was the emphasis placed on the support the Japanese armies provided to anti-colonial movements in South and Southeast Asia.

Actually - and this can be hard for many in the West to swallow - there's substantially more than a grain of truth in that. Of course, it would have been 'Cheerio George, Hello Hirohito' - but nonetheless, you will find first generation nationalists like Lee Kuan Yew in Singapore ambivalent about the Japanese, and despite the atrocities, publicly acknowledge their role in inspiring post-war, anti-colonial nationalism. And in India too, the veterans of the Indian National Army - set up by the Japanese - still receive state pensions. Unlike the vets from the British Indian Army.

So, there it is. Yasukuni. Hard to fathom why they don't cut their losses and decommemorate the war criminals and move on.
Posted by Lefty E at 23:04 6 comments:

Ok, you internet heads, I've got a question. You may have noticed my Neocounter below. Frankly, I get very excited every time a new country appears. I can't wait to see the new flag scroll up. Which will it be? Luxembourg? Paraguay? The more obscure the better. Preferably a member of the CPLP (Comunidade dos Países de Língua Portuguesa) countries, thanks. A really tiny one like São Tomé e Príncipe would do nicely.

So tonight, I saw the magic number had gone up one digit. I waited with baited breath, only to discover it was "Asia/Pacific Region". Huh?

My only thought: Is it a non-self-governing Pacific territory? Like Tokelau or something? Or could it be Norfolk Island? Or American Samoa? I'm assuming it would have to be somewhere without its own url country suffix.

Liberated from ***, and more Portuguese in Asia

Not much of a tech-nerd, me, but let me tell you: my whole system is soooo much smoother and faster since I uninstalled [forced update: a certain browser which appears to bug those who dare criticise it].

I don't mean 'ceased using it'. I did that a while back in favour of Mozilla. I'm talking uninstalled. It's like a new machine. Huzzah!

Now, back to the main game: so, there I was, in this bakery in Kyoto, buying some bread for Little Miss LE when I hear the shop assistant say "pow" - in reference to the well-known leavened flour of yer familiar western variety.

"What the...!" thought I, excitedly. Like you, no doubt, my immediate thought was: That's gotta be straight up Portuguese from 16th century trade contact. That word, Sir, is none other than pão!

And indeed it was. You'll be relieved to know I've since located this handy-dandy page, and you'd be amazed at the number of Portuguese words in Japanese.

However, arigato is not one of them. Lot of myths that this is related to obrigado - but I'm going to have to let you down gently here. It ain't so.

Anyway, as if all that wasn't cool enough, there was a massive Brazilian festival on too. Loads of Brazilian guest workers there of course, many with Japanese ancestry. The ATMs all have Portuguese language options.

Do you see how this is all coming together? Finally?

Couldn't help but notice on my recent trip the Japan that most of the touted 'internet cafes' were closed, and replaced by Wi-Fi instalments. The guide book - the latest one - was out of date in most cases. but only by a month or so.

Now, I know Wi-Fi is all bells and whistles etc. But frankly, its a royal pain in the ass. It has this air of increasing internet access, but it doesn't really. It increases private internet use in public - not public internet access. It's actually killing that stone dead.

Indeed, I'd say the internet hasn't been this inaccessible since about 1996. Welcome to the great leap backwards. That's the last time I remember a medium sized, cosmopolitan city like Kyoto having, say, one or two public internet places. So unless you're dragging your own terminal around with you (and let's face it laptops are not cheap), you're increasingly screwed.

I actually own one myself, but who wants to drag it around on a holiday? Not me. But am I still and email junkie? Of course I am.

But more broadly, wasn't there once some idea of public access to the www? The info superhighway? Global connectedness etc? Paying a modest buck and getting some tube-time as global citizen, on the cheap? Forget it. That idea's dead. And unlike telephones, the state never did have a stake in the technology, so there's not even a residual welfare-style system - as there is with public phones.

I doubt the global gulf between the wired and unwired has ever been greater.
Posted by Lefty E at 01:29 8 comments: