Please invade us and terminate this 300 years of stupidity

Bonus! Our Head of State can now be a woman, even if there’s another option. Plus s/he can marry a Catholic (though naturally, she can’t actually be one, like say, me: a secular atheist who was baptised a Mick – and all my relatives).

Obviously, I've always wanted to be part of nation that wouldn't have people like me as top dog.

Thanks Commonwealth, for updating the irrelevance of the peevish and shitty Restoration prejudices we call our Constitution.
Posted by Lefty E at 01:20 6 comments:

In this post, I'd like to formally apologise for reaching 43 summers before reading Kingsley Amis' Lucky Jim.

Christopher Hitchens is right, it is the finest comic novel of the 2nd half of the the 20th century; but not as right as some bloke called Toby Young, who chucks in the first half as well.

As I wipe away remaining hysterical tears from the 'Merrie England' public lecture scene, I furthermore issue a general statement of regret to several friends and colleagues, on whom I have urged David Lodge, or Malcolm Bradbury, as the finest exemplars of the campus novel; without mentioning the Master. Was any ill-informed lit critic ever so blind!

Finally, oh fickle Lords of memory, please let the requisite time of forgetting pass quickly, so I can read it again.
Posted by Lefty E at 18:25 4 comments: 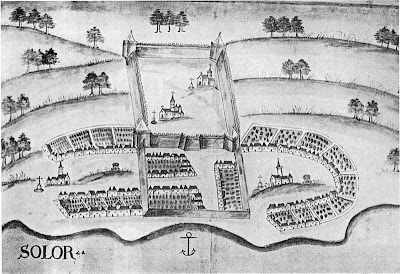 News from our fort at Solor

Some will laugh at us, Amilcar, in a future yet to be imagined.
As you say, O meu Capitão.
The Holandes, they will pass.
Sons of Spanish pimps and Flemish whores, O meu Capitão
But our fort at Solor will endure.
This I believe also, O meu Capitão.
Because in their hearts, all men are Portuguese. And they were all lost, seeking the Indies.
May they see our forts, O meu Capitão...
...and know themselves, Amilcar. This is why our impossible empire
will whisper... forever.

Both my grandads were WW2 veterans - one a left wing coal miner, the other a conservative middle class teacher. Neither wanted a bar of the RSL, ANZAC day - or anything else to do with that time of their lives.

Let us not forget that many Australians unease with the martial routines of ANZAC day is also informed by war veterans, a direct legacy from those who returned; and that Australians voted twice to defeat conscription.

Fort Solor Vidlog! See below the list I keep on my iPhone whenever I watch a video. Which is quite often, I confess. Ive been getting into Eric Rohmer, Louis Bresson's finest pupil Louis Malle, some sci-fi, some horror, Spanish language film, and of course, as always, 1970s Australian film.

Ive bolded the ones I thought were really top shelf, and tried to be picky at it too. Some of them Id seen before, but love - these will be obvious. I've also used strikethrough for the genuine stinkers.

If you loved or loathed any of these, or have related recommendations, leave a note in the fort gate suggestions box below.

I could eat a plate twice...

Liamista goes Luso (like...finally!) and plates up a bossa feijoada at his new blog.

Don't blame me, I voted for Pemulwuy

Ngrams - you know you want to

Listen here, philologists amateur and professional: Google Ngrams are highly groovy. You can check the relative usage of particular words over a 500-year period - and also compare British v American English.
For example, ruthful blips up in the 1580s before succumbing to its ruthless antonym.
And here you'll note that connexion was really quite competitive with connection until the 1850s (indeed, it was winning in the early 19th century):

Those are things I've discovered in a few minutes of playing around. Let me know if you discover anything cool!
Also available for French, Spanish, German, Russian and Hebrew.
Posted by Lefty E at 10:36 No comments: 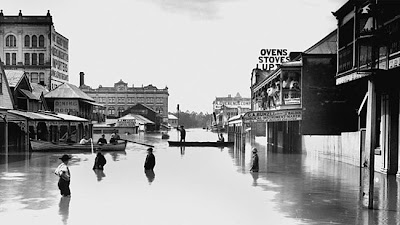 From The Brisbane Courier, 6 February 1893.
DISASTROUS FLOODS.
UNPRECEDENTED RISE IN THE RIVER.
LOSS OF LIFE.
FEARFUL DESTRUCTION Of PROPERTY
INDOOROOPILLY RAILWAY BRIDGE
WASHED AWAY.
SCENE ON THE RIVER.
DREDGES AND STEAMERS ADRIFT.
__________
THE WATER RECEDING.
The unprecedented floods from which this   part of the colony is at present suffering have, since last publication, reached the magnitude of a widespread calamity. A number of lives have been lost ; hundreds of persons have been deprived of their homes and of the whole of their little possessions, and the loss of merchantable goods cannot at present be estimated. At the  time of writing we are able only to give an outline of the chief occurrences of the past   forty-eight hours in Brisbane, but there is sufficient to show that the flood is one altogether without parallel since the settlement of the Brisbane district. Not until roads again become passable will it be possible to form anything like an exact idea of the mischief wrought. Brisbane was last night without communication by road, rail, or telegraph with any of the outlying districts, as indeed it has been since Friday night, so that the facts pro- curable were simply those relating to the immediate vicinity of the capital. Last night the water was between 11ft, and 12ft. above the flood mark of 1890 ; but in spite of local rain the water slowly receded from 9 o'clock.
From about midnight on Saturday until yesterday evening very little rain fell, and it was generally hoped that fine weather would set in for a time at all events ; but by sunset last evening steady rain again began, and the night as it fell over the city was perhaps the most gloomy that has yet been experienced. No gas had been available since an early hour on Saturday night, and though some lamps in Queen and George streets were lit by Messrs. Barton, White, and Co. from electricity generated at the Government Printing Office, this served to light but a small portion of the inundated streets.
Every effort is being made to supply the  immediate needs of the suburban residents driven from their homes, and while many in various districts were accommodated in empty houses, shelter and relief were also afforded at the Town Hill and other public places. Police and Defence Force men worked hard to save life and minimise, where possible, the destruction wrought, and many young men, members of athletic clubs and football and cricket teams, worked with a will, plying in boats the whole of Saturday night from point to point where help was needed.
Read more »
Posted by Lefty E at 13:07 6 comments:

What's the most intense, mind-shaking film you've seen? (Aside from I am Curious: Beige, of course). I'm thinking here of films that leave you thinking about it afterwards - rather than those that merely shock, or épater le bourgeois, as the French would have it.

I'm sure there's several I could name if I thought about it (which I haven't): but let me instead cite two Ive seen recently.

The first is Punishment Park, an extraordinary film  made by Peter Watkins in 1971, using amateur actors in a way that makes Ken Loach look like a Fabian. Its a dystopian drama set in Vietnam war era US, which is extremely effective at getting ordinary people to act out a 'side' in a very divisive time (essentially cops and officials v detainees suspected of radicalism). The involvement of the film crew late in the piece kinda blew my mind, actually - at certain points it looked as though the "cops" were going to biff the film crew.

The other is Hard Candy: an ultimate revenge fantasy film to do with creepy internet stalkers and grooming.
Yikes! What a gripper.

Got any recommendations for an old seaborne web diarist?
Posted by Lefty E at 01:25 4 comments: