With props to Tim Hollo over at LP for the inspiration, "coal-eating surrender monkeys" are what we here at BmL will be calling the new breed of climate denialist: that is, those who accept the science, but now say "its too late to do anything" and/or "we wont do anything until everyone else does". For example, the Australian Liberal/ National coalition.

When the call for action came, they immediately surrendered. When the global threat arrived, they vacated the field. When others made a stand, they ran a mile. We found them huddled and crying behind the coal sheds. They are the enviro-cowards.

They are the coal-eating surrender monkeys.

What if Churchill had done the same, hmmm? "oh, we wont be fighting them on the beaches unless everyone else does first.... and its probably too late anyway...(etc, whine whine cry)"

Pathetic. Fortunately, people with some semblance of backbone are in charge now. The main game is making sure they don't cop-out under pressure from the carping surrender monkeys, currently flinging their poo from the safety of the treetops.
Posted by Lefty E at 13:26 6 comments:

The Wreck of the Batavia: why no film? 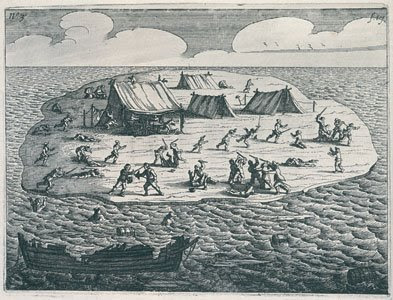 White settlement of Australia first took place, inadvertently, on June 4 1629 when the Dutch East India Ship Batavia was wrecked on Houtman's Abrolhos (which means "open your eyes" in Portuguese), a small group of inhospitable islands off the West Australian coast. Three hundred civilian passengers were left to wait as Commander Pelsaert and most of the officers sailed in a small boat to Batavia (now Jakarta) for help.

Left under the command of the deputy VOC commander, a psychopath called Jacob Cornelius, the passengers entered a three-month living hell of murder, rape, enslavement, and deranged tyranny under Cornelius' gang. Only 116 survived.

This story has it all. There's even good guys - Wiebbe Hayes, a Dutch soldier who resists Cornelius' thugs after being marooned with other soldiers on a nearby island.

And how's this for a gripping climax? Cornelius is captured by Hayes, but the rest of his gang a still at large as the Dutch rescue ship comes over the horizon. There's a desperate seaborne race to get there first, to win the authorities to their side of story.

SO WHERE'S THE FILM, Australia???? This is sheer madness. This story is unbelievable - and true. Why the constant failure of the imagination in this country? The failure to see how great, how universal even, some of these magnificent tales are.

And I've been watching the fantastic The First Australians series. Same goes for that - perhaps more so. Ok, so we've had The Tracker, yes, but where's the movie about Pemulwoy and the resistance around Sydney? He and his warriors took Parramatta! Its an incredible tale. And Jandamurra in the Kimberleys? The Kalkadoons at Battle Mountain in Queensland? Why are we so pathetic at this? New Zealand is way ahead on this score.

Is it that we daren't offend the pathetic denialist sensibilities of certain high profile culture warriors? Or is it a deeper malaise, a cringing disbelief that any story taking place here is worth telling? Or worse - are we just plain scared of the truth? That we might displace Cap'n Cook from his endless victory in grade 7 social science texts? Or demonstrate how constant was the Indigenous resistance?

Honestly, I'm sometimes genuinely embarrassed by this country's never-ending adolescence. Here's hoping it changes with the apology. I think it might, actually. I'm optimistic. Now, a good start would be some quality films on key episodes of our history - exciting, wild tales, like those above. Do I ask too much?

UPDATE: Hooray! Some googling suggests there may be a film about the Batavia (starring Vinnie Jones) underway. I'll believe it when I see it. This project has been mooted before. But still.... no Aboriginal resistance movies? Come on!!
Posted by Lefty E at 22:16 10 comments: 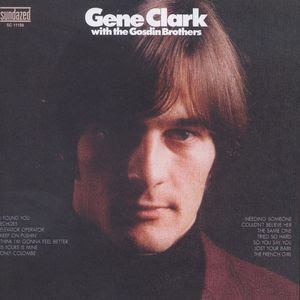 You know, The Byrds had some luminaries as members: David Crosby, and Roger McGuinn. But watch their early videos on Youtube, and the only fully-fledged musical genius in that band is the guy playing the tamborine. The magnificent Gene Clark.

Any hit the Byrds had, if not composed by Dylan, you can bet it was written by him. Try "I'll Feel a Whole Lot Better", "She Don't Care About Time" and "Eight Miles High" on fer size. All Clark compositions.

And if "I'll Feel a Whole Lot Better" isn't objectively one of top 5 greatest songs of the 60s, I'll personally eat your hat. Sometimes, when it's late at Keating Towers, and I'm ferreting away here with headphones, while the world sleeps, I believe it to be the finest pop song ever written.

And how many other native American pop stars were there? If anyone knows others, comment away.

Anyhoo, if you like 60s west coast sounds, get yourself his solo album from 1967, after he left the Byrds: its sometimes called Gene Clark with the Gosdin Brothers, other times known as Echoes. It's truly a forgotten gem. In mon humble opinion.
Posted by Lefty E at 23:40 3 comments:

Through fields of cane....

It may not surprise you to learn I'm really not much of rural type. But last night I was staying at Ms LE's ancestral German -Australian farm just outside Brisbane, where her Prussian antecedents settled in the 1860s. Her sister and brother still live there; though they don't farm or anything earthy like that.

Anyway, the more genuinely rustic neighbours were burning their cane crop. I watched for an hour, and it was magnificent. Fire licking the sky, cane bark flying high over bulging smoke clouds, big bursts of flame followed by low crackling subsidence, then another rush of hot flame leaping skyward.

In the morning I could see why the method was once favoured (I'm told its used less now, for reasons I don't get). The cane was so clean, black and straight, ready for easy harvest. Awesome!
Posted by Lefty E at 00:36 4 comments: