You know, I remember the good old days when having the Oz flag publicly displayed was a sure sign of either being an extremist Larouchite, a gun owner, or mentally unwell. Now its like, Gen-Y chic or something. Certainly, its become nativist protest wear - reverently displayed on on the boardies, a towel, or the car.

I'm starting to miss Australians' deep-rooted suspicion of jingosim - which as others have noted, dates back at least to the failed conscription referenda of WW1. I for one liked that Australia better - we support our volunteer soldiers, but you can take your compulsory imperial /militarist hoohaa and shove it, and the same goes for the ra-ra patriotism of the Yanks. Let's recall that the Australian people voted no to the imperial conscriptors twice; they stopped even asking us when Vietnam came along.  Basically, I think 'the kids are alright', but they need to know the history.

And I'd really like to see an Australian politician say it: many Australians are wary of American-style showy patriotism and jingoism - but no less proud of the country for that. They wonder what someone wrapped in the flag is trying to flog them. I reckon it'd go down a treat. Knock this "nationalism-as-majority-ethnic-gang" bullshit on the head.

And one doesn't like to over-dramatise, but I do feel Cronulla kinda changed it for everyone. I'm not sure anyone contemplating a harmless little flag wave can truly avoid the new semiotics. For example, it concerned me that several non-Anglo background colleagues were saying  "have a good Australia day!" yesterday as we left work - like that's necessary to say these days, or there'll be riots! There's something kinda fucked up about all this. And as another friend pointed out, it isn't so long ago that there was a general sense of ambivalence about the embarrassing Britishness of the flag. I don't know whats happened, but I miss the lack of popular resonance with our national symbols.

So I'll come out and say it: I for one am still proudly embarrassed by the bastard Jack. And guess what: this is my country too. And aside from flag-totin' bogan gangs intimidating other citizens on the beaches - I mostly love it. So step off with your kiss-da-flag bullshit.


Postscript: An ex-ADF friend of mine noted today that the military has been in a fully fledged recruitment crisis throughout the entire Howard-and-beyond revival of jingoism, flag-waving, Gallipoli trips etc. Much as I support not signing up – I think it aptly highlights the bullshit factor of the whole thing.

For all you inner-North Melbournites, check out this ace online Darebin Historical Encyclopedia.

Its got pics, oral history, a WW1 database, and most interestingly of all, scans of the Northcote leader from 1888 onward.

Mind you, local history is probably only really interesting when you have a deep-rooted sense of place. To that end, I wonder if there's a South Brisbane equivalent?
Posted by Lefty E at 00:30 No comments:

As you may know, we here at BmL are shallow cosmopolitan types - rootless Jacobites all. Stoics, Cynics, and citoyens du monde. As such (and given the need to facilitate trade in the greater Solor/ Larantuka region), fort command is quite interested in your second and further language pursuits.

So pray tell, what other languages can you speak, and how/where/why did you learn these? Also, which language do you wish you could speak, and why?

I'll kick off in the comments box, to give the illusion of traffic.

Meanwhile, right on theme: Flight of the Conchords!

On China at Copenhagen

I was reading this piece by Thomas Friedman on China and the Green Revolution. Basically, it illustrates the sheer size and scope of China's renewable energy expansion and investment in the last year. And its further plans for nuclear expansion as well.

As Friedman notes, of course, China is doing all this for domestic reasons: energy security, and the fact that their cities are too polluted already to cope with the largest rural-urban migration in global history.

Though Friedman doesn't speculate on this in the article, it got me thinking again about China's tactics and strategy at Copenhagen. How does it all add up? The Chinese scotching a deal, not only for the world (worried it might limit their growth) - but also scotching the advanced economies setting targets for themselves, that reportedly so angered Merkel and others?

Now, I'm aware the US also played a deeply problematic role (by not playing ball on Kyoto) but it seems to me quite clear what is going on: China intends to sell us green technology down the line, not the other way around.

They don't want any competition from more advanced economies. Their diplomatic game in Denmark supported this aim - a simple old-school, realist game aim of scotching the industrial competition. The failure of Copenhagen is a long term investment in their export-income generating, industrial future. Note also the only position they did strongly advance - that there should be no trade sanctions to enforce any international deal.

I think they correctly assessed that key Western polities would - with the slightest encouragement- get stuck in a partisan cycle of inaction, and award China a big market niche by default. Influential players in the advanced economies would literally jump at the chance to come last in the green tech race, and all they needed was a bit of obstruction to fall over. China didn't even mind playing the villain - all the better, since falling over is so much easier when you aren't blamed for it. Cui bono?

Friedman's article points out there are now so many solar operators in China now the price of solar has dropped 70%. They're weak on R&D though. They know the West has the advantage there, but they also know there are big players who didn't want to see change. So they were most helpful in encouraging the West to delay any serious moves.

So, US, UK, EU and Australian mugs - you want China to get the leg-up on the 'Green Revolution'? Because that was quite probably their plan at Copenhagen. 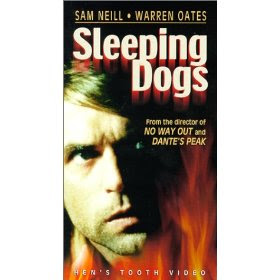 The premise is that a general strike occasions the rise of an authoritarian military government in New Zealand.

Sam Neill is your reluctant hero in the resistance. As it happens, its ekshually a great film, and the first NZ film ever screened in the US of Ay, Bro.
Posted by Lefty E at 02:20 4 comments: