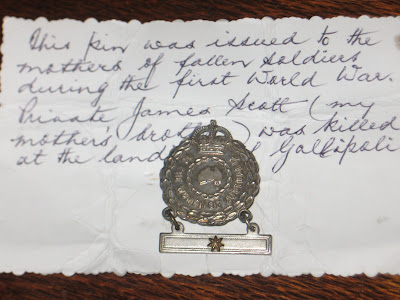 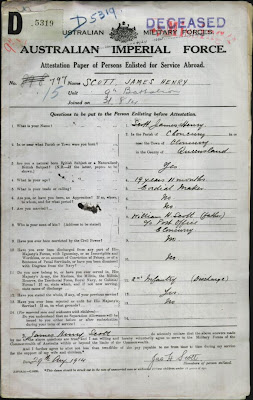 James Henry Scott, 19, of Cloncurry, QLD, enlisted in August 1914, in the first few weeks of the war, and was drafted to the 9th Battalion. The 3rd Brigade of the 9th was the covering force for the ANZAC landing on 25 April 1915, and was the first ashore at around 4.30 am.

He did not live to see the sunrise.

When my grandmother died in 2005, I inherited this badge, 'To the Women of Australia'. My grandmother's writing is on the card. James was her uncle.

This badge possibly went first to his sister, my great-grandmother, as their mother is referred to as the 'late' Catherine Scott in military grave records. Or perhaps James' mother died, grief-stricken, between 1915 and the formal headstone finally being laid at Gallipoli. I don't know.

There's a lot of respect, a lot of ceremony, and a lot of remembrance of WW1 these days - but I'm not convinced any of that truly captures what must be been the real legacy in the decades that followed: the grief. This badge - and the 61,720 like it - is a small reminder of the unbearable personal sorrow that must have rent this country, town by town, street by street, room by childhood room.
Posted by Lefty E at 23:32 8 comments:

I've just been mucking around on the National Archive's Australian Prime Ministers site - and from there I bring you the following trivial notes about each of them, selected on the highly scientific basis of what interested me most within 10 seconds:

Edmund Barton : nicknamed 'Toby Tosspot' by the Bulletin.
Alfred Deakin: only PM to reject title 'Right Honorable'.
Chris Watson: First Labor PM in the world, established the solidarity rule by which he was expelled from the Labor Party. Youngest ever PM at 37.
George Reid: only Australian to serve in all three legislatures – colonial, Commonwealth, and British; first former Australian PM to die.
Andrew Fisher: first Prime Minister to hold a majority in both the Senate and the House of Representatives, in 1910.
Joseph Cook: initiated first double dissolution of Commonwealth parliament, dubbed ‘the most humourless’ of the prime ministers.
Billy Hughes: 51 years as an MHR – the longest serving Australian federal parliamentarian. This does not include his prior 7 years as a NSW MLA 1894-1901. Woah!
Stanley Bruce: we all know that along with John Howard, he is one of two Prime Ministers to lose their seats while in office - but did you know he was the only Prime Minister laid to rest in Canberra?
Jim Scullin: first Catholic Prime Minister, and (possibly not entirely unrelated to the first fact) the only red-headed PM.
Joseph Lyons: first PM to win three successive elections, and with Reid (NSW), one of two PMs to have been a State Premier (Tas). First to die in office.
Earl Page: one of the first Australians to own a car (in 1904), record for the shortest official stay in Britain – 1 day (1925).
Robert Menzies: one of three former Prime Ministers awarded Japan’s Order of the Rising Sun, First Class! The others are Edmund Barton and John McEwen.
Arthur Fadden: PM for 6 weeks, but longest serving acting PM (nearly 2 years) while Menzies was tarting around Britain between 1949 and 1958.
John Curtin: the only Prime Minister to have been in jail (as an anti-conscriptionist in 1916).
Francis Forde: shortest term in office at eight days. On 11 July this year, should he make it, Whitlam will beat Forde's record of 92 years as longest-lived former PM.
Ben Chifley: refused to wear ceremonial clothes and became a Privy Councillor in his own suit in 1945.
Harold Holt: was a federal parliamentarian for 32 years - the same duration as Robert Menzies.
John McEwen: record for longest service in parliament before becoming PM (33 years). Holt 2nd at 30 years. Naturally, Menzies is the origins of these complaints.
John Gorton: only PM sworn in while a Senator, for three weeks was PM without holding a seat in the House of Reps. Only PM to have a non-Australian wife (American).
William McMahon: despite being 2nd oldest to become PM at 63 (McEwen oldest at 67), fathered his youngest child while in office. 'Respek!', as Ali G would say.
Gough Whitlam: only Prime Minister to grow up in Canberra, though spent the earliest part of life in Melbourne. Will (hopefully) become the longest-lived Australian PM on July 11 this year. Go Gough! Its time!
Malcolm Fraser: in 1955 was then the youngest MP to ever enter parliament - 25 years old. Keating matched this in 1969. Came to office with greatest winning margin in federal history (1975), and lost office with (joint) largest ALP victory in 1983.
Bob Hawke: 1983 win roughly ties with Curtin's 1943 win for largest ALP winning margin ever.
Paul Keating: third longest serving federal treasurer, after Costello and Fadden. Consequently, 2nd longest serving treasurer to ever become an Australian PM. ;)
John Howard: only Liberal Party Prime Minister educated in government schools, campaigned for the Conservative Party in Britain’s 1964 election. Other rare distinctions include losing his seat while in office.
Kevin Rudd: info on site "under development". But here's one: he used to clean Laurie Oakes' house while a student at ANU. Ewww!
Posted by Lefty E at 11:16 8 comments:

Election slogans tend to be left motherless at the best of times - even winning campaigns are generally sick to death of them by the end. And naturally, losing slogans are well and truly consigned to to the dustbins of history. So, I did of bit of scratching around, and found them in a journal article, cited below. A few initial comments and curios:
I can't decide which is the lamest. I think it might be the utterly colourless "Go for Growth" - though hot contenders would also include the bizarre brain-fart that was "Incentivation", the ever-irritating "Ease the squeeze", and perhaps the rather pointless and weird "We're not waiting for the world" (huh?). Anyway, here they are, in all their glory!

1972 LNP - Right today and Right for your future/ Not Yet

2004 ALP - Opportunity for All Australians/ Mark Latham and Labor: Taking the pressure off families/ Ease the squeeze

I don't know how I managed to miss this film for the last 28 years (and as it happens, my first parent-less venture to the flicks was in 1981, at 13) but what a stonker this film is! Not only is it a great suspense/ thriller, but its also an hilarious script.

In fact, I seem to have managed to overlook director Richard Franklin completely. In order the rectify this omission, Ive got Patrick (1978) on the shelf for next viewing. Tarantino is a big fan, sez the DVD cover. Hmm.

Anyway, despite the slight element of cringe that might have come with having two US leads (Stacey Keach and Jamie Lee Curtis) in this otherwise very Australian film, it really worked for me at all levels. Ive always liked Keach - very underrated actor, and he's a laugh riot in this. Pure genius of a performance. Check the scene backdrops too - there's a weird bar scene on the Nullabor - and the walls of the pub have murals of an extremely eerie kind. Graffiti in a roadstop toilet too. Very pre-History Wars. Wont spoil it for you.

Five lattes, with a biscotti on the side. Even Ms LE liked it, which, like, totally never happens. In fact, she reckons my taste in film is a low point of our otherwise higher scoring, pike position with a double twist, difficulty 3.7 relationship. And frankly, thats why I talk to you, dear imaginary blog friends (oh look - zero comments) about film instead...
Posted by Lefty E at 22:48 2 comments: 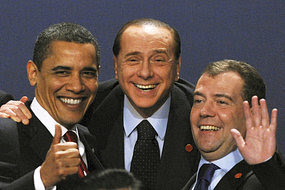