Its a beautiful place. Pray tell, punteros, why are we so ill-attuned to the Pacific in general? Particularly those among us - including your 'umble correspondent - who grew up in Quinceland? (I'm prepared to give Sandgropers a free pass on this one). 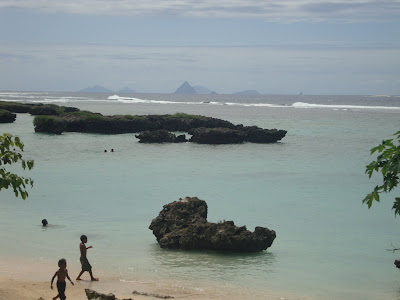 Is it a generational (X) thing? Were our colonialist forebears more engaged with those imperial territories before the waves of independence in the 1970s? Will the young 'uns be more so than us, owing to the recent Australian interventions in the so-called "arc of responsibility"? Is it because people my age encountered an independent Pacific and lost interest? Or is it simply a case of "hang on, I'm still getting used to the whole Asia deal - slow down!". Or is it something more prosaic, like low rates of travel, and therefore higher airfares? The latter is certainly a dated view these days, what with the decline of QANTAS monopolies in the region. 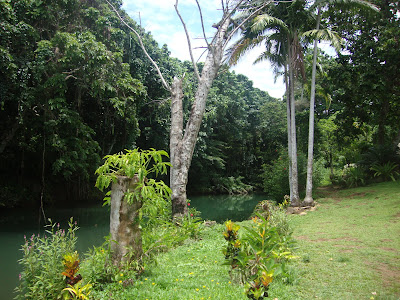 Anyway, I was there for work, but had one day touring the island of Efate; home to the capital, Port Vila. The bottom picture attests my nerdy interest in colonial history. As you may know, Vanuatu was formerly the New Hebrides and - unusually - under the control of the joint Anglo/ French Condominium (otherwise known as the 'Pandemonium'). 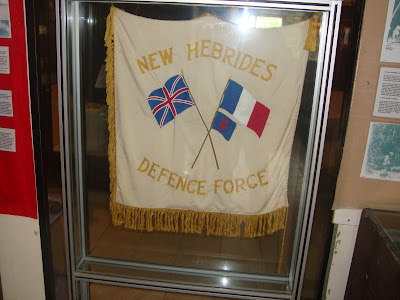 But that's easy. Quiz time is harder than that! Whoever correctly identifies the smaller flag below the Tricoleur (not you, World of Yentl) is this month's Capitão do Fortaleza at BmL! (Click for higher-res, if you want a closer squiz.)
Posted by Lefty E at 22:36 23 comments:

Your call is important to us...

BmL is currently somewhere in the region and can't take your call. Please hold while our dedicated service personnel struggles out of his hammock, or leave a message below.
Posted by Lefty E at 21:22 No comments: