Here at BmL, we're having a party! Inviting all our friend!
(We've only one, but she's a larf, she lets us all attend).

And while you're at it, ooh, its the E-cyclopedia of Portuguese Expansion. 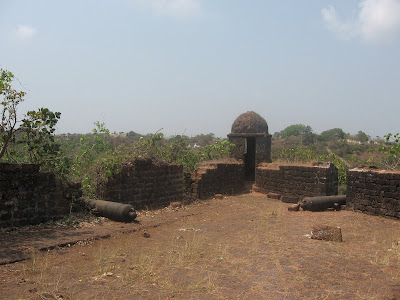 Its been too long between forts, O meu Capitão! Hove the lateen sail and noon-point the sextant for the latitude of Reis Magos. First built in the late 1500s, this fort swathed in wild forest overlooks the Mandovi river and the lovely town of Panjim, former capital of the (rather ostentatiously named, given its size) Portuguese Estado da India - now capital of Goa state, India.

Reis Magos (the 'Three Wise Men' in Portuguese) is a small village across the river, consisting of a Church, a small village, and this very old fort which once guarded entry to the capital.

The main thing I recall about it - aside from the pearler of a view - was my arrival inside the walls, after climbing the steep, crumbling stairs. Two local guys were sunning themselves, half asleep, and we all surprised each other at awkwardly close proximity. The thought pattern at that instant was probably much like this:

Me: Shit - two men, isolated spot. Are we friendly?
Them: Shit - look at the size of that Gora. Is he friendly?

It was then that I recalled a favourite passage of Gregory David Roberts' Shantaram, which I was then reading. In it he explains that the classic Indian side to side 'head-waggle' (for want of a better term) is in fact a gesture of general affability and friendliness. So I tried it on. And blimey, it worked! They both relaxed visibly, and one said "hello - you seem nice!". 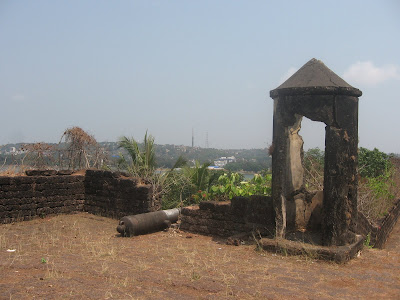 Aside from the cross-cultural gesture awareness breakthroughs, it was a great fort too! Some classic cornice sentry boxes, as you'll see. If you're ever in the area, I'd recommend the semi-hidden Reis Magos over the larger and better known Fort Aguada nearby.
Posted by Lefty E at 18:51 7 comments:

'I gits a stretch fer stoushing Johns' - The Sentimental Bloke (1919) 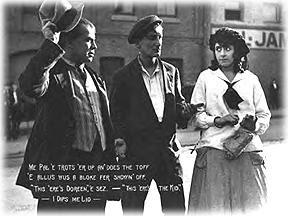 I've just seen the DVD reprint (with soundtrack by Jen Anderson) of Raymond Longford's classic silent film The Sentimental Bloke. Normally bored and already squirming in my chair by the very idea of silent film, I was quite taken with it - it really is an engaging movie, capturing the wonderful vernacular of C.J. Dennis' verse novel.

C.J. himself (who had only published it 4 years earlier) appears at the start of the film. The main female lead (Lottie Lyell) was the de facto partner (and reputed co-director) of the credited director Raymond Longford, who you can see interviewed shortly before his death in 1959 on the extras. When a print of the film was rediscovered in the 1950s and re-released, he was found - then in his 80s - working as nightwatchman on the docks.

There's some great footage of Manly and Wolloomoolloo after the war, including a genuine digger in the background on the ferry as Bill and Doreen go on their first date. I really enjoyed it, and partly, if you'll allow the digression, because I once recorded an album at Jen Anderson's studio back in my musician days. A friend and I - both in other bands at the time - recorded a lowly independent CD there as a two-piece with some spare songs our respective outfits weren't using. He suggested Jen Anderson's studio - then in Northcote - where his band had recorded before. We both lived in Brisbane then, and it was a great week down here recording and louching around with muso friends and acquaintances.

Ten years later and I live a few streets away - though Jen herself has moved elsewhere in Melbourne. Suffice to say, she really was a great producer and sound technician - and I am truly blessed - as a part-timer then, and no longer in the game - to have Jen Anderson's violin solos on a song or two of my own. It really lifted the whole thing to another plane - and made it sound like I knew what I was doing. Which, by and large, I didn't.

Coming from Brisbane, I didn't realise then how BIG her band Weddings, Parties, Anything were in Melbourne. We went to a party and met them all - they were really great people. Top memories - thanks Jen! Whatever you're up to now. Anyway, the point is: I think the sound track is beautiful, and works seamlessly.

Oh yeah - and the title of my post. Watching Underbelly this last year, I got to wondering where this "Jacks" slang for coppers had come from, as I 'd never heard it. And lo! They appear as the "Johns" in C.J. Dennis. Mystery solved?
Posted by Lefty E at 23:35 8 comments: