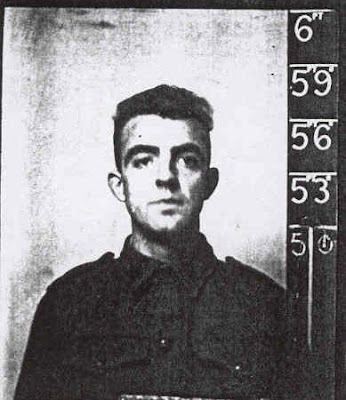 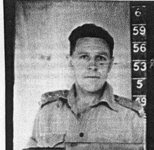 I don't know if anything particularly profound will emerge from writing this, but, inspired by Pavlov's Cat, I offer this reflection on my grandfathers. Seen here enlisting for service in 1941.

On the left, my paternal grandfather, who I never met, though he survived the war. A sapper in the 9th Division, he was wounded in action at the 2nd Battle of El-Alamein in 1942. His casualty record blithely states "Cas Sect. 28-10-42 wounded in action. Confusion, hallux. Evac 2/3 AFA". The 28th October was a critical day in battle against Rommel. He had two shrapnel wounds from a shell, and was evidently found disoriented.

More mundanely, and no doubt demonstrating the constancy of stress, his record shows he was sectioned several times with hemorrhoids. Jesus, I can well imagine. By 1943 he was in Port Moresby, having returned on the fleet that Curtin brought home for the Pacific War. My dad recalled hiding under a bed when his father returned in 1946, yellow with malaria, and scary to behold to 6 year old eyes.

His occupation was listed as 'labourer' upon enlistment. He ended up life as a publican, however. According to my Aunt, he rescued a young solider at El-Alamein whose old man was a Brewery magnate. She remembers their family pulling up at their house after the war to give my Grandad a chance at running a pub.

It has occurred to me before that this near random chance event just might be one key reason I was born securely middle class. He certainly wasn't. Born in Bolton, Lancashire, to cotton mill piecers. The twisted sea of fate!

On the right my maternal grandad, the one I knew and loved all my life. He died a few years back at 91. I met his older brother at his 90th birthday, and also met his near-centenarian mother when I was very young. A teacher, and a Captain in the Australian militia (Citizen's Military Forces), he was transferred to the AIF when a friendly doctor reversed an earlier decision on a childhood spinal injury. He served in Bougainville and once fled his tent on instinct in the dead of night to see it explode seconds later. A grenade had been rolled in. He mentioned the war only twice in the thirty odd years I knew him. Once was that grenade story. The other was when he was a bit tipsy and maudlin, and before he shook it all off, quietly let out that he had found himself covered in a dead mate's blood and body parts after one attack.

He was allergic to any and all tropical foods. "Only since the war", said my grandmother.

No wonder they wanted a quiet life.
Posted by Lefty E at 00:30